Have your say! Articles written by fan contributors

A Year Too Soon for Villa?

None of us have a backdoor into the thinking of Sawiris and Edens. Of course they want to stay in the Premier League but even at almost $200,000,000 spent on players, they don’t seem to be any closer to a cohesive unit that will stay up as they did at the start of the season even though they showed some promise last August. How are they thinking over the Xmas season? Are they true fans of the sport? Are they looking at the team from a purely financial view? What is their timeline for success in the Premier League?

Like most players, managers are motivated by their own interests. For example, does anyone think that Bruce, Warnock, or Big Sam Allardyce will ever manage a top six team in the Premiership? Didn’t think so. What is their motive then? 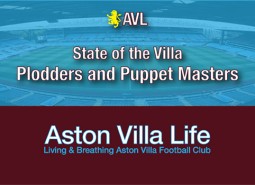 Thank You, Steve, but It’s Time for a Change

The players took to Steve Bruce, and he had a not-too-bad record in the Championship this year. He has four promotions to his name. Then this year he tanked in the ultimate game. And it was a game-changer for me. His entire career culminating in one game and it slipped away. Reason enough to thank him for his efforts and hand him the box of personal items from his office.

Do Aston Villa need Birmingham City Football Club? Do they need Wolves? Or how about West Brom? Of course they do. What is it going to take for all four West Midlands sides to be in the Premiership at the same time?

Which Version of Villa History Are You Writing?

Dissecting Steve Bruce can be a fun pastime. Either slating him or hailing him as a genius creates discussion, banter, and some thinking about opposing points of view. All of this is fodder for our blog. 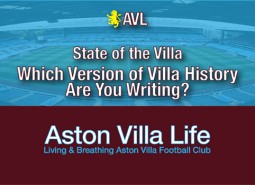