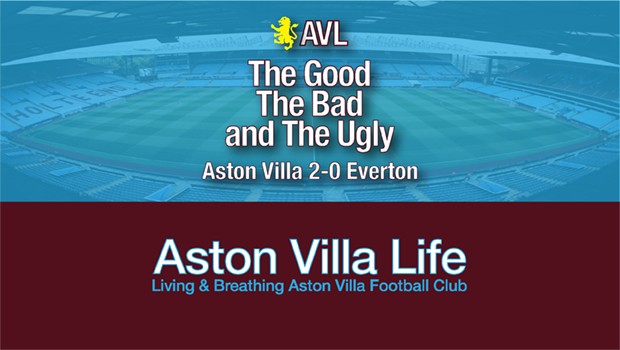 Villa’s second outing at home saw Wesley and Anwar El Ghazi open their Premier League accounts, and Villa get their first three points of the season in a 2-0 victory over visiting Everton. It was a big day for the club, as well as the loud, joyous crowd rocking Villa Park. We’ve waited a damn long time for Premier League win.

The Good
Obviously the win as much as the three points. Sounds silly, but ‘winning’ is something besides the points. Wesley getting off the mark. El Ghazi coming on to put an exclamation mark on proceedings after a poor outing against Bournemouth. He had a point to prove, and seems to come back better after getting pulled. Then there was Jota getting his first start and sliding through a sublime ball to put big Wes in. He really has a touch of quality, Jota, great awareness and calm on the ball. Frédéric Guilbert making his debut and adding a lot of speed, anticipation, and support, as well as a hard old-fashioned tackle toward the end. All of a sudden we were more balanced, with Jota and Guilbert offering as much threat down the right (which was evident in preseason) as we’ve gotten used to seeing down the left. Luiz had a quietly solid game, and seems to be growing into it fairly easily. A little bit of luck finally falling our way, perhaps, with the block and the woodwork. Jota works well with Wesley. (Wonder if he’ll get the start against Palace. It’s going to take a lot to keep up with Zaha.) Mings and Engels again looking solid at the back. A clean sheet. Fantastic scenes and atmosphere at Villa Park.

The Bad
As well as Mings defended, he was pinging a lot of errant long balls, but apparently by design. Well, the attempts, not the outcomes. Trezeguet didn’t have a great day, but kept at it. Can’t really think of much else, to be honest. We got sucked a bit too deep once again, which led to another nervy finish, especially after Iwobi and Kean came on for the Toffees, but we’ll get to that. Everton had three good chances, and will probably count themselves unlucky on two of them. But generally speaking, every team will have chances, and we took ours.

The Ugly
Walcott not even putting the ball on target. Beautiful.

Final Verdict
A lot of questions were answered on the day. Smith admitted in his post-match comments that the way Villa have been playing is deliberate. Which we might’ve concluded on our own having seen largely the same approach as at Spurs. But it was a little tough to tell since that’s not the way Smith has set out Villa’s stall. Before the game I said we looked hesitant. And I think there has been some of that, some dwelling, some adjusting, all the rest. But we’re also not pressing higher up the pitch on purpose. We’re playing the classic counterattacking game, inviting teams on, and giving ourselves room to play into. If we keep converting, it may well change the way teams approach us.

We’ve been more expansive at times, but at this level, there’s a lot talent. A lot of pace. A lot of athleticism. You can be full of all sorts of attacking intent, but you can quite easily get shredded in the process.

So, Smith talked about avoiding mistakes, getting it up and over quickly (part of Mings’ poor distribution, as he was trying to make a lot of long passes). He was pleased by how quick and threatening we looked on the counter, and by and large, I’d say we’re getting there.

Marco Silva was certainly implying in his comments after the game that Villa were parking the bus. But if teams want to play a high line, press and take the game to us, Dean’s more than willing to accommodate them. He didn’t buy four big CBs and two DMs for no reason.

It’s also clear he didn’t buy Wesley for no reason. Villa were very quick to pull that trigger, and it’s clear now this target was indicative of the way Smith planned to play, at least to being with. And on the day, Wesley started to look a multipurpose danger man, holding up the ball, getting others involved (see the play that led to El Ghazi’s goal), and finding himself with two excellent chances, one of which he took, cool as you like. He’s fast, strong, good on the ball, unselfish. A little more experience with the attention he’s receiving and I think he’ll really start to find his way.

Is this Deano failing to deliver on the organization’s attacking promise? I don’t think so. It’s an acknowledgment of reality. It’s development on the go, rather than a destination, and Smith’s no fool. As he said: “It will take time for us to compete with some of the established teams in this league.”

Villa need points. They need confidence. They need to buy time to adjust. So, take the standard text, play the highest-percentage game you can. Get settled, learn to defend, create and take your chances. The result, therefore, was big for another reason: It helps the players buy into the tactics and takes some pressure off.

The free-flowing Villa we’ve come to like is still there. There was a spell Saturday where I thought we might start taking Everton apart. But that wasn’t how it worked out. We didn’t get the second, and Everton settled back down. Against Bournemouth, there were longer periods where Villa were playing their game. I’ve seen it compared to Leicester. You could also look back to Chelsea in the Drogba days.

I also found Newcastle’s win illustrative. Whereas this style is Bruce’s stock in trade, it’s not Smith’s. The barcodes had five at the back, which helped negate Spurs’ wide play. They ventured forward on the break more conservatively than Villa, so they didn’t have Spurs really running at them, and pressed a little further out when packed in. Spurs were also having one of the their flat days. But credit to Newcastle for helping that along. Be rather curious to see if we ever see Smith take a page from Bruce’s book.

Anyway, the big thing is that the players are capable of taking on a Plan B, and seemed to learn a bit from their exuberance at Spurs. We also have to remember that at roughly £13m a player, our window was far from extravagant. There simply were a lot of holes to fill. In a world where £130m buys you a couple-three world-class players, spending an average of £13m to rebuild a squad to survive…Well, £130m was very much a case of assembling a squad to survive.

Going forward, Smith can start picking and choosing 1-3 positions of true need to splash cash on in a given window. We don’t know what January will bring, but if we stay up, the following summer will be interesting again.

So there’s that. Off the mark and a lot of positives.

Tonight’s game? Well… Given survival, I could very well see a B team being played. Davis up front, perhaps a debut for Marvelous. Maybe Luiz. Lansbury, Hourihane. Elmo and Targett. Don’t necessarily have a lot of options out wide, but maybe it’s El Ghazi and Trezeguet. Dunno. Doesn’t really matter—because apart from how Smith wants to approach it in terms of development and valuable minutes for a lot of players, it’s completely irrelevant to our survival.

Now of course a win is always a good thing, and if Smith makes a lot of changes, there’ll be a lot of players with something to prove. And really, the B team should handle things. But a cup tie’s a cup tie.