State of The Villa: Consolidation Time 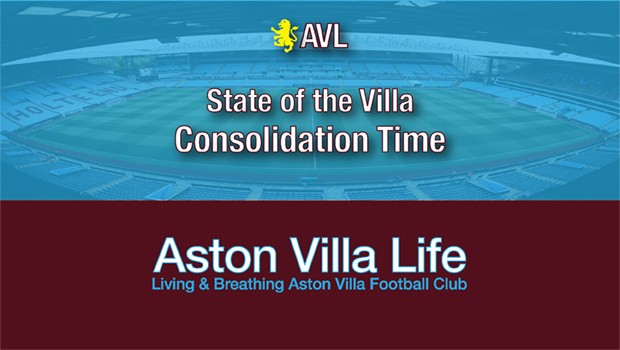 Well, that was fun, wasn’t it? Despite Roy Keane’s sour-as-usual point of view, Villa’s post-match mood lined up pretty well with supporters’. We didn’t win anything, but we did show fight, determination, a bit more nous, and regained a bit of self-respect in putting in a strong finishing run to stave off relegation and remain in the promised land of Premier League money for another season.

Villa looked dead and buried. Chances had gone begging. Goals were few and far between. Restart rules and scheduling seemed stacked against us. The run-in included three eventual Champions League teams, along with Jekyll-and-Hyde Arsenal. Rivals notched important, unlikely victories. The supporters were largely resigned to a return to Tuesday nights at Huddersfield and the departure of any player we’d come to like.

Bournemouth and Hawk-Eye? That was ten games back, and let’s talk about Konsa being stepped on: Villa can rightly say, “We’d have both been on 34 points, same goal differential, and we stay up on goals for.” You just can’t go back and play with the past. There’s a whole time-travel paradox thing there to consider.

So Villa were to ultimately snatch victory from the jaws of defeat, God might have had a hand in it, and Dean Smith was ultimately to squash talk that he didn’t know what he was doing.

And I get the talk. Following the 0-4 defeat to Leicester, Villa looked to be in free-fall. The Christmas period fixtures we’d hoped would springboard us to relative safety went completely wrong. Late goals and bad decisions were costing us vital points. There were games where we just didn’t show up. Injuries had ravaged a very thin squad. Whatever Deano tried didn’t seem to work. There wasn’t much hope in sight.

As we all know now, though, Villa used the break to maximum advantage. They shored up weaknesses and got stingier. They learned a bit more English. They hunkered down in a World Cup-style camp and did some bonding. Jack got caught being a bit naughty and popping round to friends’. But otherwise, it was what we’d hoped: a time-out that ultimately worked to Villa’s advantage because Smith got a chance to prove he is a coach after all.

Of all the lockdown revelations, what I found most interesting was Smith saying there just isn’t time in the season to do the sort of detailed, player-by-analysis, review, and coaching that took place during the suspension. Which is to say, it’s easy to say it should happen, but it may well be that, as a matter of practicality, it just can’t. Not that way, anyhow.

So, the £140 million gamble paid off. Villa retooled on the fly and just managed to get over the line. Lessons were learned, and I’m sure Smith would raise his hand and say he learned more than anyone. But he kept an even keel, never panicked, didn’t start pointing fingers, or sit in the dugout looking ill. He shielded the players, deflected attention, kept the mood positive. In short, he didn’t burn bridges, and had goodwill to work with when given an unexpected chance to halt the slide.

Anyway, I’m not going to get into a lot more right now. We’re all exhausted and relieved, and jubilant about being the 17th-best team in the league. I’ve said it many times: This season was just about what I expected. I’m quite happy with where we finished. Didn’t need to be quite so hard, but in the end, it all came good. Or good enough. Get up, stay up, consolidate.

There’s a lot of work to do in that consolidation. Negotiations to be had. Players to keep, players to sign, and players to let go. Smith has indicated as much, and said quite plainly that Compass have billions, Jack’s under contract, and they’ll not want to see him leave. John McGinn had similar thoughts.

“I think everyone is aware we need quality added. We obviously spent a lot of money last summer and we may need to go and do it again.

“We can’t get complacent and think everything is alright now. It was a poor season overall, we know that, both us as players and I am sure everyone upstairs is fully aware of that. There will be changes, I am sure of that.”

So, fair play, Super John. That’s about the size of it. And I’m glad he and others feel the season was poor. While surviving was what we needed, Villa also need to reflect the owners’ ambitions and start climbing the table. But however nervy it was, Villa have ticked off step one. Well, one and two, now that Suso is gone.

Next, we’ll either hold on to our best players or make a lot of money, bring in some new ones, and go again.