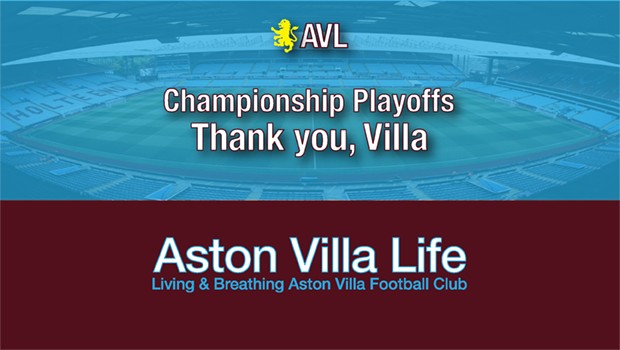 Here we are, the quiet before the storm. Tickets and travel plans. Cautious optimism, nervous anticipation. The week before Villa’s second consecutive Championship Playoff Final. And you can’t say it hasn’t been engrossing, these Championship seasons, whatever we might have thought of the football at times.

Three of them, along with three owners (just), three managers, and now two playoff finals. Near financial collapse and a sudden and unlikely rescue from the brink. A record winning streak, the emergence of a star. Loan players who’ve worked their way into the hearts of Villans, the slow exodus of youth as the academy’s role is re-imagined. A fateful cabbage.

I’ve seen Villa mocked a bit for their celebrations following the dramatic shootout victory at The Hawthorns. But when you think of all that’s happened, all that the players and supporters have been through, you can’t begrudge them one bit. It was a feat worth celebrating. A moment worth cherishing. No, we didn’t win any silverware, didn’t claim promotion.

Like Dean, I was annoyed we didn’t win. Seems like we should’ve, with 40-some minutes against 10 men. But Albion are no pushovers and they’re local rivals who were looking to bounce right back up, and do it at the expense of Villa. The Hawthorns was a cauldron of energy driving them on, giving them legs and resolve. A hostile environment, you might say. Trailing 1-2, they’d already lost and so really had nothing to lose.

And Villa were on the ropes, make no mistake. Nerves were on display everywhere and everything they’d worked for looked to be unraveling before our eyes. We were rattled.

So for Villa to not go to the canvas, and instead summon up the composure and self-belief necessary to dash the yam yams’ hopes in their own house, one at a time from the spot under the spotlights…Well, I’d have been celebrating, too. That was a pressure test and they passed.

They’re not perfect, our Villa, by any means: If we go up, there’ll be many changes. If we don’t, same thing. As it stands, this side will only be together for one more match.

But I like this side. I like players that have responded to new methods, tactics and expectations. Players that have wormed their way back into favor. I like that Glenn Whelan proved critics like me wrong, because we needed him to. I like that Neil Taylor rediscovered some confidence. I like that Jed Steer emerged an unlikely hero after it seemed like he was inevitably going to do something to cost us the match and the season. I like that when we fall behind we keep playing. I like that we keep looking to score in the 93rd minute.

I like Mings. I like Axel. Kortney, too. Jack and John. Tammy, who gives his all even when starved of service and chances. I like that Kodjia has accepted a limited role, and still comes on and scores. I like the way Albert has also weathered storms and criticism and does what he’s asked. Jedinak coming on with ice in his veins to score from the spot. I like El Ghazi’s arrogance even when the talent it derives from doesn’t always produce results. I like Conor’s willingness to sit behind Whelan and, like Kodjia, come on to save games instead of pout.

I’ve no idea what happens in the final. Well, not anything I’m willing to put down in words just yet. I’ll save that for closer to the main event.

So while everything’s quiet and the anticipation builds, seems like a good moment to thank the players and Dean Smith for getting us here.

One more win, and you’ll have etched a spot in the club’s proud history and be part of a side that will be remembered: one that gave long-suffering supporters their club back—and some pride, as well.

That’s what the players and staff were feeling at The Hawthorns: That they’d been asked the hardest question yet, and had an answer. That they might be part of something special. That their destiny is in their hands and they’re capable of seizing it. I’d have been celebrating, too.