Sheffield Utd. 0-1 Aston Villa: The Good, The Bad & The Ugly 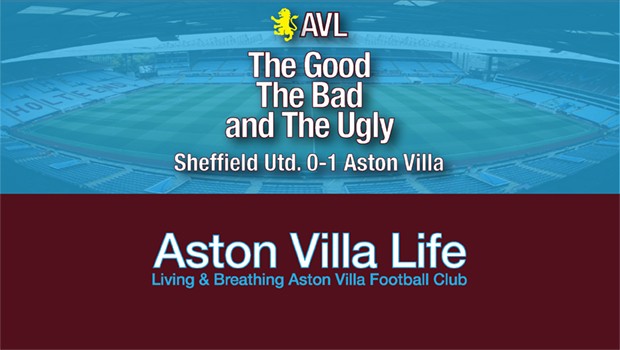 Good lord…Aston Villa find themselves in virtually uncharted territory following Tuesday night’s victory to continue our perfect 2018. Five wins in five, I think, thanks to Robert Snodgrass’s 90th-minute winner in what Blades fans will almost certainly consider a smash-and-grab. But Villans won’t care a bit how the 1-0 win over Sheffield United came about. All that counts is that it did.

The Good
Rather obvious: another win, another clean sheet, another three points. Which is obviously all you can ask for in any outing, home or away. Fifth consecutive win for the first time in 20 years. A bit of luck. Some great saves. And a team that didn’t cave or stop trying to find a winner.

Robert Snodgrass continued his emergence as a goal-scoring contributor, cutting in from the right to curl a fantastic shot inside the far post. Villa were delirious, the supporters went mental, and Sheffield were shattered.

For me, what really counted, though, was simply finding a way to win. So many matches turn on an individual moment of brilliance. And Villa should and do have players capable of producing them. That we somehow managed to keep a victory within reach—even though the long layoff seemed to have bogged the side down a bit—was truly encouraging as well. Individual moments don’t matter very much when you’re down two- or three-nil.

The Bad
As stated, Villa weren’t sharp. They did have energy and desire, and kept at it, but the Blades certainly had the better chances, and more of them. Jack Grealish was limited in influence, Conor Hourihane seemed a bit lost, and Birkir Bjarnason and Sam Johnstone being the standout players pretty much tell you the game wasn’t going our way. The woodwork came to our rescue early, though, and it turned out to be a sign of how the night was going to go for Sheffield. They’d come out to win, but it just didn’t seem to be on the cards.

The Ugly
I’m not really seeing anything, to be honest. The stats weren’t great, we probably should’ve lost. But we didn’t. So, no ugly. Or beautiful ugly. I dunno.

Final Verdict
Villa are finally looking up for it week-in week-out, and the largely settled side is coming together as a team. We all know we won’t look great every time out. We all know that finding a way and will to win in spite of that is critical.

It’s also critical that the goal-scoring burden has been distributed. Largely reliant on individual moments from Jonathan Kodjia last season, Villa are now getting goals from more players. Sometimes this adds up to five on the day. Sometimes just one. But you’re a lot harder to beat when you have more than one credible threat. Adomah can score from the left (though he seems to have been relegated to more of a supporting role of late). Hogan can suddenly do it up front in the middle, and Snodgrass is now contributing from the right. So, try to mark out the in-form man and maybe you’re just picking your poison. Teams seem wise to Grealish’s inside cut and curler, but it draws attention. And if Jack starts finding the mark…well, that’s a lot of scoring threats to account for. And with Hourihane and even Bjarnason chipping in, there seems to be at least one goal in the side on any given day.

Further back, Bjarnason has been a bit of a revelation at DM, and perhaps the footballing gods finally smiled on us when what seemed like more adversity was in fact a silver lining. Largely forgotten, the Icelander stepped in when Whelan was felled by the flu and Jedinak had yet another niggle. And just like Uncle Albert, he’s made the most of the opportunity. While Bruce may not have come to certain decisions fully on his own, he’s been smart enough to stick with what’s working. And Bjarnason has been working well enough that even highly touted Axel Tuanzebe didn’t get the debut he’d seemingly been guaranteed. Faster and more mobile now at the DM position, Villa have a very hard-working midfielder who’s making life easier on the back four, as well as those looking to get forward with less fear of being caught out. If Tuanzebe is an upgrade, well, I like the sound of that.

There are a number of other things I could point out, but I’ll just leave it alone for the most part. I’m getting happier by the week, and I think it’s good for all of us that Steve Bruce is less and less the focus. Naturally we’ll lose again, or drop points from a winning position. But we’re truly up in the mix now as we’re playing well enough against the sides around us to stay there. If Villa can remain focused and take care of business against the league’s lesser lights, games like Tuesday’s will ultimately be the difference.