We’ll Always Have Our Ups & Downs, But We Have To Stick Together 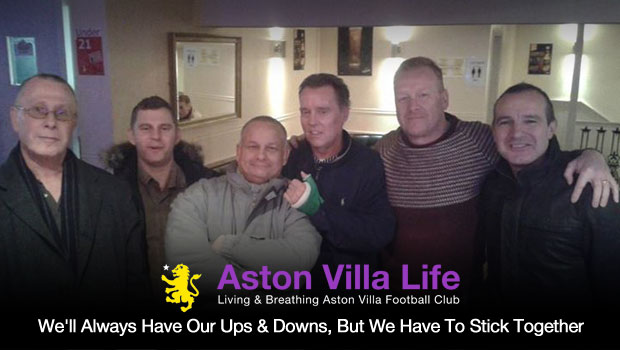 I’ve never been much of an “underdog” supporter. Born in Brooklyn, New York, my home team has always been the New York Yankees. Everyone knows who they are. Twenty-seven time world (I know, “world” makes no sense) champions! Baseball connected me to my grandfather, an Italian immigrant who worked so hard to make America his new home, and latched onto the two things that he so loved about this place: baseball and Budweiser. However, when my childhood love for football was once again ignited via my Juventus-supporting father, it was another top class club for which I professed my undying devotion: FC Barcelona. And while I didn’t commit to an EPL club for a while, I decided on Aston Villa.

My Villa journey is nearly a year in. I suppose that because I know nothing of the glory days, and am only used to what I’ve seen this past year, I still have no qualms about being a fan; more importantly, no Villan should ever try to dissuade someone from supporting their club.

There’s no way that I can sit here, writing, and pretending that I have an insider’s knowledge of the Villa. Or much of what has been going on, due to my recent sabbatical. Merely, as a more recent spectator, it’s obvious that we’re not a well-oiled machine in any sense. Yet, and maybe I need a stronger lens to see it, I don’t see how things have changed all that much in a year. The same things are being said of the club, now.

As a few of you have mentioned in the comments, Villa fans are divided. Half see the glass half-full and the others are knocking the damn thing off the table, glass and water flying everywhere. I realize the pessimists are angry, and they have every right to be. But the optimists have every right to remain that way, too. Neither group is right or wrong. The problems arise when the unneeded vitriol comes into play. Perhaps it’s been said ad infinitum, but not this way: why don’t we all cut the hateful shit out?

There’s one thing that I didn’t have with the Yankees, or Barcelona: a sense of community. With teams so hugely popular and dominating, it didn’t matter if fans banded together because there are so many. Aston Villa is something completely different. Despite the manager, despite the owner(s), the club as a whole is greater than the sum of its parts. That was what I had to keep reminding myself when Joe Torre left the Yankees, or when Pep Guardiola walked away from Barcelona.

Community is what I found when I walked into AVL a year ago. While the club had its ups and downs, we were a damn cool group of people. As Steamer said yesterday, “What a shame that people can only unwind when AVFC isn’t the main topic.” It is only natural that supporters feel angry when they believe that their club is beaten down and dragged around by incompetent higher-ups, but AVL has always been the place to unwind – at least for me.

These are the things I know:

1. The majority of you are very, very mad at Paul Lambert.

Personally, I’m not in agreement with the majority, here. And I also believe that a lot of what Lambert says is either skewed or taken out of context by the media. (Surprise, surprise, shit-stirrers looking for attention.) Fact is, we know what we have. We don’t know what we’ll get. Yes, sure, it’s a 50/50 shot, but I genuinely believe that Lambert loves the club. Yes, yes I know: but is that enough? Which brings me to…

2. Randy Lerner doesn’t know his ass from his elbow.

Not even going to try and justify Lerner. To me, the guy has dollar signs in his eyes, and not burning desire to see his club climb to the top. Much like myself, I don’t think he’s got a clue how to take the reins.

3. You want to have a reason other than loyalty to attend games – especially of the home variety.

I don’t know why Villa choke at home. If someone can enlighten me, that would be great. We go to matches not only to support the team, but also in the hopes of seeing our club win. It’s understandable that fans would become jaded and feel like, well, what’s the point? But if you’re a lifer, you know that it’s part of your duty to always back your club. It doesn’t mean that you can’t feel frustrated, or vent that frustration. Just be mindful that everyone has an opinion, just like you do, and you wouldn’t want to be made to feel like shit just because you think differently.

Be angry if that’s what you feel. Be optimistic. Pessimistic. Remain neutral. Twirl in circles. But whatever you do, maintain respect for your fellow Villans. Divided we fall.

Now that my “let’s play nicely, boys” spiel is over, I just wanted to briefly thank everyone who sent me well-wishes, checked up on me, and said kind words during my hiatus. I lost one of the most important people in my life to complications of brain cancer on September 15th, 2013 – my uncle Danny. Sadly, we’ve recently found out that my grandmother has bone metastases. So if anyone’s familiar with it, please drop me a line: kristina@astonvillalife.com