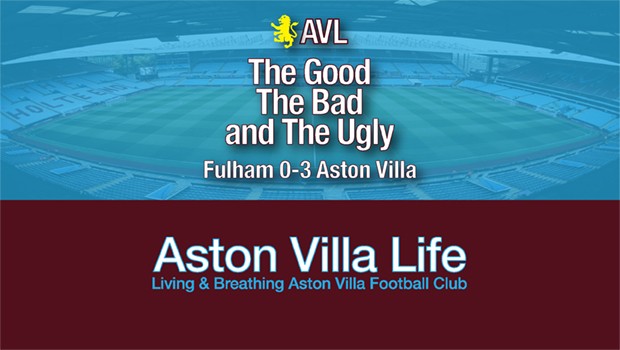 Aston Villa are off to a flying start, winning our first two fixtures in the new campaign after dispatching Fulham 0-3 on Monday night. Hard to believe, but it’s only the third time in the club’s history that we’ve won the first two matches to start a season. It was also Villa’s first away clean sheet in 27. Again, hard to believe.

The Good
Another clean sheet, three points, three goals. Jack scoring, and Villa taking advantage of a bright start to go two up in 15 minutes with Conor Hourihane getting back on the scoresheet with a trademark open-play goal. Konsa and Mings dealt well with nonstop aerial assault aimed at Mitrovic’s head. And for the second week, one of our CBs was in on the goals, spreading them well and truly throughout the side. Traore once again looked very good coming on late. Jacob Ramsey looked quite good, too.

But almost as good as the points was Super John McGinn finally looking like his old self. Two assists, both lovely, forward impetus, and much more of the dirty midfield work. Really good to see, and quite happy for him.

The Bad
You know, I’ve not really much to say. We could point to our lack of possession and sometimes sloppy play, I suppose. But the game we might have expected was altered so dramatically being up by two in the first quarter-hour that I think Villa were content to let Fulham just throw in wide crosses, deal with them, and try to break for more. Bit of a shame that Ollie didn’t get to open his league account, but he had a good game, nonetheless.

Maybe caught a bit of a break on Fulham’s disallowed goal, but it was a clear foul, and Konsa would’ve been running into the rebound space. Mings getting a very slight touch on the shot with his head seemed to put Martinez off, leading to the spill, and the keeper wasn’t happy. He’s not shy, and that’s what you need.

The Ugly
The Cottagers’ defense. Looked as bad or worse than ours in more than one match last season.

Final Verdict
With six points on the board already, Villa have reached nearly 20% (17% to be precise) of last season’s point total. The value of a quick start is so hard to overstate. And two wins is almost a quarter of our victories last year (9). To see us sitting fourth, momentarily, after a couple games…well, I don’t know what to make of it. Won’t last, but it makes fun viewing of the table, for once.

Obviously, Fulham are struggling defensively. But you can only play what’s put in front of you, and when you’re playing winnable games, you just have to win. Villa have excelled at creating early chances, but too often they’ve gone begging. Monday, we converted, and what a difference it makes. The game was really over after 15 minutes, and certainly after 48 when Tyrone Mings sealed the points. And whatever we say about the Cottagers’ defending, all three of our goals were well worked and taken. Jack and John really set the tone with the opener, and it was a good finish from a tough angle.

Fact is, some teams are going to be more open than others. We couldn’t really break down Sheffield, but got the set-piece winner. Fulham were there for the taking, and we were clinical when it mattered.

To be honest, I’m not quite sure Villa knew what to do at two up. We obviously wanted more, and missed out on a true romping, but otherwise, as I said, we seemed quite content to continue our defensive focus, staying organized, letting Fulham knock it about, and looking for the breaks. Lots of balls in to Mitrovic, naturally, but Konsa and Mings did a nice job putting him off when they weren’t intercepting. Players were also throwing their bodies around, intent on keeping the clean sheet and not giving Fulham hope. Don’t forget, Fulham can play some nice football. They lost by the same margin to Liverpool opening day, but did put three past Leeds.

So. Good stuff. And I’m imagining, just from the subs, that Villa can field a more dangerous side from the off in weeks to come. Never mind incomings, because I still don’t think we’re done. And whatever you might think about Trez, it was classy for Dean to leave the side unchanged and not just put Traoré in to start.

Again we have a very unhelpful cup game with Stoke before Liverpool come calling. I’d like to think we’ll take largely the same approach as at Bristol. Because everyone knows the scousers are going to give us all we can handle.

But we’ll get to that. No sense ruining the afterglow until it’s necessary.