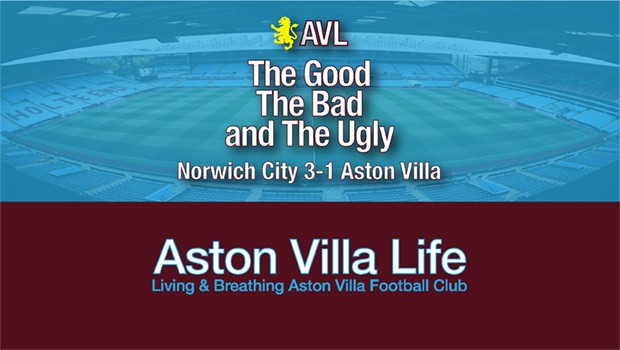 Not a good day at Carrow Road—Villa had a chance to take advantage of Cardiff’s loss to Wolves and make a run at an automatic promotion spot Saturday. Instead, we fell to the Canaries 1-3, and sit seven points off second with five games to go. On this run of form and with our run-in, just staying in the playoff spots is going to take some work.

I’ve had a bit of trouble with this one, and it’s long, but let’s get to it. Feel free to skip to the end.

The Good
No one died.

Things seemed okay enough, and then they weren’t. Villa seemed like they might have some sort of answer, and then they didn’t. Jack finally got another goal, but it mattered not.

The Bad
Villa never found another gear or viable approach when it was all still to play for. One sucker punch (which was a lovely strike) at the end of the first half was followed by a very soft goal early in the second when John Terry tried moving up to put his man offside instead of dropping back to cover him. At 0-2, it seemed all but over. Johnathan Kodjia and Lewis Grabban replaced Albert Adomah and Robert Snodgrass immediately thereafter. Jack pulled one back, and for about five minutes it looked like we might at least salvage a point, but then we went and conceded again, and Villa seemed to meekly accept the game had gotten away from them.

While on paper subbing in Kodjia and Grabban might not seem the worst idea given that Albert Adomah and Robert Snodgrass had not proven decisive on the day, it didn’t really accomplish much. Villa did claw a goal back following their introduction, and it was Kodjia with the assist for Grealish. Fair enough.

But really, it’s not a particularly good idea on paper. We’ve complained all season about the lack of Plan B, and it was in evidence again Saturday. Both Kodjia and Grabban ostensibly can play from wide areas, but neither is actually a winger. What you get is three central players, leaving the wings exposed, putting more pressure on the fullbacks to both deliver crosses and defend. The forwards largely end up canceling each other out with the congestion, and there are fewer options for getting them the ball. Each thrives in a different set-up, yet putting them all on means they’re the set-up, and they’re not well suited to providing service for each other.

It did change the way we play, but not necessarily in a cohesive, well thought-out way.

The Ugly
Whether tired mentally or physically, there was no extra spark in a huge game at a big moment. For all intents and purposes, we didn’t seem to have the bottle for it.

Final Verdict
Watching the game, it simply felt like one of those days. A goal from out of nowhere, a second from a mental mistake, and voila, too big a hill to climb.

However, at this stage of the season to be flat in a game like this was troubling, all the more so given how much better we’d played against Reading. However poor the Royals might have been, we showed fight and energy, connected well and quickly, and took it to them throughout. I would’ve liked to think that on this day, we could’ve dug deep, found another gear, and similarly played like our lives depended on it. It just didn’t happen.

I’ve seen the season-long perspective raised, and I think those who are asking questions of Bruce are right to do so. As far as Saturday’s starting lineup is concerned, that’s the team I would pick most often, as I’ve said, though I’ve really been talking about Grealish, Bjarnason, and Hourihane, with Hogan up top. Adomah and Snodgrass pick themselves. This group has scored goals, produced most of our best football, and is the quickest, most athletic, and energetic combination we seem to have.

Sadly, though, there’s been no methodical development of the side overall, either in terms of youth, systems, or players that can be rotated in without us losing cohesion. The players obviously have to shoulder responsibility for their performances on a given day, but it can also be the case that the team has not been managed astutely.

(And to be fair, injuries have played a role in hindering development. Lansbury’s been unavailable for long stretches. Players like Tuanzebe have come in and picked up injuries. Kodjia, obviously has missed most of the season. You know the list.)

It was, as we know, changes enforced by injury that inadvertently produced a decent side, one that it’s long been argued Bruce would not have arrived at on his own. But Bruce was keen to mess with it, seemingly to try and fit in players we’d acquired.

To my mind, though, when Plan A isn’t clicking, you go back to something else that worked well at times, which was getting Davis in. But Davis has largely been absent of late, meaning that a reasonable Plan B has never been cemented.

Which leads a person to look at the bench—uninspiring, to say the least. I get the value of experience. But to have Jedinak and Whelan both on there really defies belief. If you don’t trust anyone else to come in at CB, then I guess, okay, you’re going to put Jedinak in, for better or worse. But it seems a bit late in the day for us not to have another CB prepared to come into the side.

Beyond that, there’s no room on the bench for Whelan right now. Give the spot to Davis, so you can change the way we’re playing if Plan A isn’t working, and do so in a manner with which the team is somewhat accustomed.

And while the idea of having Kodjia back is nice, I’m just not seeing that he’s ready to come on and take over a game. He does have moments of magic in him, but I worried that trying to slot him back in would be disruptive at this stage. It’s either he or Grabban on the bench, and most likely Grabban, given fitness and match time. If you think Hogan is the problem, start Grabban. Onomah? Again, why? What’s he really going to change? Fresh legs, sure. But he hasn’t shown that he’s going to swing a game your way. Lansbury I understand, but he’s just not been played enough when fit up to now to be at his best, and Bruce doesn’t seem to know where to put him anyway.

Further, there was no other FB available to change things up if either Elmo or Taylor got hurt, were having a stinker, or were being overrun. Why insert Tuanzebe into the side almost immediately, and then take him back out? Wouldn’t he have been a substitute that could either have changed things at the back or slotted into the DM role to allow the side to stay strong, athletic, and quick to get more going up front without opening ourselves up? He’s certainly no more a liability than Onomah. Never mind the youth we’re never going to see. The ship has already sailed, but someone like O’Hare could have changed the dynamic up front, provided energy, and a different type of service without making us vulnerable.

In short, seems to me this was an extremely cautious and ill-considered bench. It said that either Bruce expected the starters to be strolling, or that he’s just being Steve Bruce. Throwing on Kodjia and Grabban was certainly an attack-minded move, but really smacks of desperation and says there is no Plan B. Or not a very clever one, anyway. It’s back to the strange choices with no apparent logic. That should not be the case at this point.

Anyway, I’m left scratching my head. I’d already assumed second was gone, so I’m not necessarily depressed or angry about that. However, I am depressed because it did suddenly become possible and we were completely unable to do anything about it. We ran out our best combination beyond the back four, got nothing, flailed in trying to change things up to get something, and now have Cardiff on Tuesday. If this bunch were tired or bottled it against the Canaries, I have no idea how they’re going to put up a real fight Tuesday. Maybe they will. Maybe they play best when things seem out of reach and the pressure’s off.

But if that’s the case, it doesn’t bode well for the playoffs. This is exactly how you don’t want to be playing through the run-in, and while we can and should look to the players, we also have to look to the manager for having no apparent means of changing things for the better. Everyone else around us is flying, by comparison, and we’ve lost our way.

All certainly is not lost at this moment, but the trend is decidedly unfavorable. Unless being underdogs is what gets the best out of us.