Talk Tactics – Should A Team Attack At All Costs? 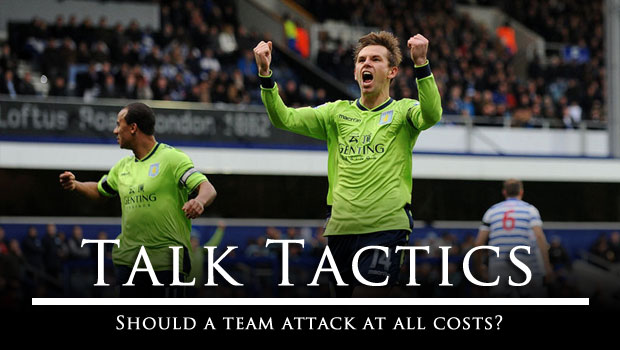 Against Queens Park Rangers, Paul Lambert set out his young Aston Villa side in a 3-5-2 formation. Not since the era of Brian Little, when players like Alan Wright and Gary Charles were pulling on the claret and blue have I seen a team play in such a formation – it was certainly different.

On the face of it, some might suggest a point is simply not good enough against bottom-of-the-table QPR, but a point is certainly better than a team could do against a potential banana skin team under new management. Whether Harry Redknapp will change the London club around is yet to be seen but, as they remain winless in December, they are certainly a true definition of a team in trouble.

Of course, many Villa fans have the same belief about their club as the team from B6 languish in the wrong half of the table, a problem compounded by the success of West Bromwich Albion as Steve Clarke’s team sit as close to the top as Villa are to the bottom.

Getting back to the game, 3-5-2 was a fairly attacking formation to be using away from home, though I imagine at least part of the reasoning for its usage was a desire to move the width of the team forwards into the midfield.

Villa have been enduring something of a defensive personnel crisis with Ron Vlaar, Enda Stevens, and Joe Bennett unavailable for the trip to Loftus Road. As a result, and due to the comparative abundance of midfielders, pushing the width into the midfield made a lot of sense, and this was largely the motivation for Lambert’s tactic.

As the game wore on, I know some fans were puzzled by the substitutions involved, as well as a belief that the team were sitting back happy to perch on their early lead.

However, one does have to question the substitutions that can force a 3-5-2 team to be more attacking than they currently are. To start with, let’s break down the options.

Where can you take players from to attack more?

Given the nature of the defence’s role in a 3-5-2 formation, it was rather unlikely that the team were going to make more of an attacking threat by pulling out defenders. Whilst Brazil and Uruguay had success in the 20s and 30s of the 20th century with 2-3-5 formations, the game has moved on since then.

To have less than three at the back would have been seen as a part-cavalier, part-reckless view. Had Villa conceded under these terms, the anger would have been bubbling up suggesting that you have to keep it tight at the back if you have any chance of coming away with a point or more.

So the defence was unlikely to be the area where the change was made. So let’s look at the midfield.

Given the nature of playing five in the middle, and the fact that QPR were doing the same, taking a player out of the midfield to add an extra attacker would have mean ceding the main battleground to the opposition, a tactic that would have meant far more pressure was pushed on to the defence and, with only three at the back, it would have meant even more chasing for the team.

It also would have made the team unable to have the width to deal with players who were roaming wide like Adel Taraabt, Shaun Wright-Phillips, or even Jose Boswinga. Given Villa’s lack of natural width, giving up any extra space to the aforementioned QPR players would have been tactical suicide for the manager, and thus we didn’t take a midfielder out to put an extra striker in.

So was the formation right in the first place?

With 3-5-2 fairly rigid when it comes to dealing with the opposition threat, some might have thought that another, more practical formation was a better fit for the game. However, given the personnel available, and the fact that some fans have lambasted Lambert for not attacking sufficiently, we should look at any of the other plans and whether they would be any more palatable.

4-4-2 would have meant at least one player playing out of position, Villa having to field players in wide roles that aren’t ideally suited, and would have given us no more attackers than 3-5-2 did. It would also have left Villa outnumbered in the midfield, pushing more pressure on to whoever was in defence as well as inviting more attacks in wide areas from Taraabt and Wright-Phillips.

4-5-1 would have had even less attacking threat then 3-5-2. When the major complaint from fans was that the team didn’t attack enough, playing less strikers hardly seems the right fix. It would have left Villa able to compete in the midfield though Christian Benteke would invariably have been heading balls backwards into a more congested midfield. Therefore, for me at least, that wouldn’t have worked.

So could the manager have done it differently?

So, when it comes down to what would or wouldn’t have worked, 3-5-2 (and the substitutions that happened) was the right thing to go for. In the deployment of a different formation, Lambert adapted where many managers would have stuck with a one-size-fits-all mentality at the cost of losing the midfield battle. Whilst postulation is always hypothetical at best, I would gamble that former Villa managers with the same squad would have lost the game against QPR due to either ceding the midfield or playing even less strikers.

Did Villa win? The answer is obviously no but, in the context of the squad available and the formations that could have been played, I firmly believe Lambert made the right choices, even though we didn’t take all three points.