Will Aston Villa Boing Boing Above The Baggies Tonight? 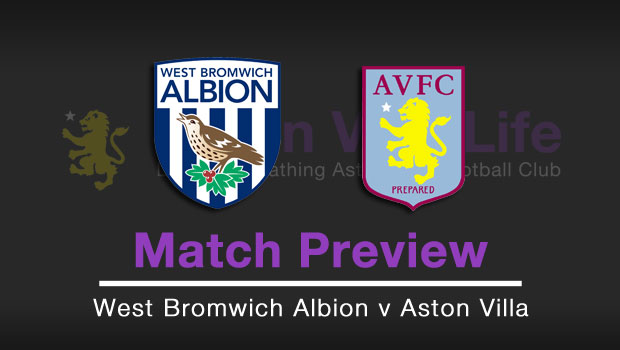 A highly controversial, last-gasp penalty decision from Andre Marriner gave Chelsea’s Eden Hazard the chance to slot home and earn his side a 2-2 draw at Stamford Bridge. Steve Clarke spoke eloquently after the match of his frustration and perhaps his biggest challenge this week will have been to mentally prepare his players for this weekend’s visit of Aston Villa following such a demoralising defeat.

Jonas Olsson continues to be a rock at the back for Steve Clarke’s side this season and his defensive organisation will be crucial against a powerhouse like Christian Benteke this weekend. Olsson has completed more clearances than any other player in the league according to the EA SPORTS Player Performance Index, with 108 to his name so far this term.

Following a sterling defensive effort against Chelsea, Gareth McAuley probably had more reason that most to feel particularly aggrieved at the final whistle. Along with Olsson, McAuley has been central to the Baggies’ defensive structure this season, winning a squad-best 75% of his 20 attempted challenges.

Stephane Sessegnon has given the West Brom squad a welcome burst of creative energy in their midfield following his arrival from Sunderland. The diminutive Benin international currently leads the Baggies squad for total attacking contributions (shots on goal, assists, crosses, dribbles) this term with 35. Sessegnon is an industry best 29/10 with 888sport.com to score at any time this weekend.

Midfielder James Morrison continues to be the central fulcrum around which much of West Brom’s play has bee built this season. He’s completed a pass in the opponent’s half on average once every 3.6 minutes he’s been on the park this term, the best rate in the Baggies squad.

A spectacular strike from Leandro Bacuna saw Aston Villa on their way to a 2-0 win over Cardiff which ended their recent poor run of form in front of goal. Combined with a clean sheet, this result will no doubt have buoyed the Villa squad ahead of their trip to the Hawthorns this weekend.

No Villa player has been more active in attack than Fabian Delph this season, who has so far recorded a squad-high total of 191 passes in the opponent’s half, as well as 32 total attacking contributions (crosses, dribbles, shots on goal, assists).

Captain Ron Vlaar will likely the immovable object which West Brom must beat in order to fashion any kind of attack this weekend. ‘Concrete Ron’ currently has the best tackle success rate of any Villa player, completing an excellent 88.8% of his 27 attempted tackles and conceding just 4 fouls in the process according to the EA SPORTS Player Performance Index.

Andreas Wiemann will be hoping for greater accuracy in front of goal as the season progresses as, despite compiling a squad-high total of 21 attempts on goal, so far only 28.6% of them have been on target. You can find Weimann at 3/1 to score at any time this weekend with 888sport.com.