Going Backwards & The Importance Of An Undroppable Player 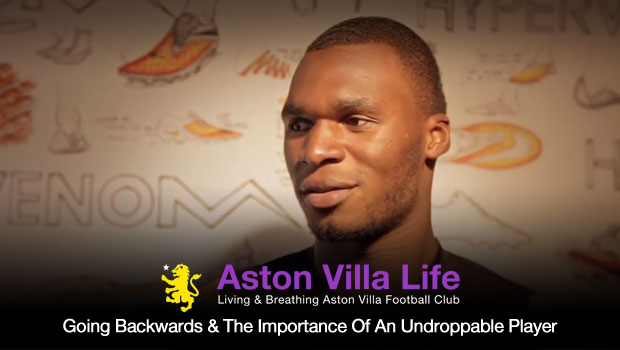 I’ve seen all three words used to describe our game on Saturday against Sunderland and, in many ways, people have a point. After all, if you go from beating the same team last season to barely scraping a draw, there’s a strong argument to say that’s going backwards.

In reality, football is rarely that simple. In April this year, Sunderland arrived at Villa Park in the middle of a perfect storm – not only were the home team starting to hit form, there was the matter of then-manager Paolo di Canio being a real target for fans.

In April, there was a nasty atmosphere at Villa Park, but it was directed straight at the opposition. From expletive ridden chants towards the away manager, to the loud, oppressive noise generated starting before the game, things were set up in a way that made Villa Park a fortress, something it rarely is nowadays.

In addition, Christian Benteke – then coming towards the end of a season that left him with a combined total of 23 goals for the club – was in top form. This Saturday? It is fair to say Benteke was a mere shadow of the player who bagged a hat trick in April.

Some are suggesting that the reason why Benteke is not at top form is down to a desire to want to get away from the club. After a to-and-fro with Tottenham Hotspur late in the transfer window, it is easy to understand how such a narrative gathers pace – after all, poor form plus past behaviour means a strong rationale to explain.

However, perhaps things aren’t as clear as they seem. Yes, Benteke has had his head turned by another club and, to that extent, there may be psychological issues that are affecting his form. Is that everything though? I personally don’t think so.

We know that Benteke was out earlier this season with an injury – named as affecting his hip flexor. What we can’t be totally sure of is whether that injury is fully fixed.

One only need look at how Benteke is moving or is jumping in order to see something isn’t physically right. Sure, it could be attributed to lack of interest, but the difference when he tries to change direction, the pause before jumping – all of these things are hints that maybe, just maybe, it isn’t just a case of a man wanting out.

Even if he did want out, things remain complex. Look at the situation at Villa Park. Despite Benteke’s recent request to leave the club, few can doubt that the club’s Belgian striker appears key to Villa’s success. In that sense, it leaves manager Paul Lambert with a tough choice on what to do – keep a talisman in the team, or drop him.

This isn’t the first time Villa have faced such a quandary. After all, it wasn’t that long ago that it was Darren Bent who was the core of most discussion. Play him, don’t play him, fit the system around him – it was a daily discussion.

This time around, Benteke at least comes without the issue of being a hugely expensive asset, at least in paid terms. Sure, Villa can sell him if they need to, but the £7m spent is nothing near the £24m plus significantly higher wages that Bent cost. In that sense, the stakes may be lower.

However, with certain fans feeling that Lambert is delivering below expectations – despite the team sitting a full five places higher than this time last season – making challenging choices is another talking point.

Whilst the manager would be pretty foolish to care about what the fans want or think – at least in selection terms – Lambert doesn’t operate in some kind of footballing vacuum. He, like the players, reads what is said about him. For some, it is water off a duck’s back. For others, it is yet another stress that makes regaining form even harder.

So what does that leave Lambert left to do? Given that he has not had much money to spend, and that he has publicly started stating that the figured quoted for transfer fees spent are far from correct, his hands are tied. Does that mean the manager is blameless? Not at all, but he is far from being able to operate freely.

Do I think he should drop Benteke? Yes, if only to give him a chance to be pulled from the spotlight as his form and lack of goals are clearly not helping the team. In my eyes, nobody should be considered too good to have to play, regardless of their form.

If the manager agrees with my call though, it is a case of Aleksandar Tonev and Marc Albrighton out wide, substitutes he tried on Saturday. Beyond that, how many choices does the manager have?

Some will argue that is down to his own choices on spending, despite his budget being severely restricted. Others will say Randy Lerner needs to bump in some money – something he may do in January – but even that is far from certain.

Can Villa progress from what was a poor game on Saturday? Yes, but the important thing is not to focus on matches as individual instances – progress is defined on a broader, league wide scale and, despite anger from some fans, Lambert still appears to be ahead of the curve based on expenditure and development.

Will 12th place be enough? Yes, for me, but are all fans going to feel the same if this is the same position the club occupy come May?